When I first started writing my novella (which I seriously thought was just going to be short story) I was naive enough to think I was doing something at least vaguely original. I mean, I knew there’d been a hefty handful of comic stories told from the villain’s POV and/or stories in which a bad guy went good. Hell, half The Avengers started out as bad guys, or at least in the deep gray on the moral scale.

Of course, I’d only started reading superhero prose–funnybooks without the pictograms, in layman’s terms–shortly before embarking on my fictional experiment, but I was already aware of a couple of terrific novels that were in the subgenre I was working in. The first is probably still one of the most popular and widely read of these books, Austin Grossman’s terrific Soon I Will Be Invincible.

The story of Dr. Impossible, recently released from prison and ready to get back to doing evil, this is one of those stories where the bad guy would be 100% more sympathetic than the heroes if it weren’t for the fact that the POV alternates from chapter to chapter between the bad doctor and a female cyborg superhero named Fatale. This was the first book I read that let me get inside the narrative heads of its antagonistic protagonists in a way that even the most literate graphic novels and comics sagas sometimes struggle to achieve. And while I already owe a huge debt to Grossman just for demonstrating that it can be done, and with an edge of satire tempered with genuine human emotions, I also owe him a debt for that narrator-swapping gimmick because I’ve shamelessly borrowed it for the follow-up to “Villain’s” that I’m hammering away at now.

Much like “Invincible,” when I first plucked Jim Bernheimer’s Confessions of a D-List Supervillain from Amazon’s Kindle Lending Library, I assumed it would be maybe good for a laugh, a jokey riff on supervillainy, based on the title alone. And considering it was an obscure offering available for a low price, I had low expectations in regards to its potential quality. Boy, was I wrong.

Like “Villain’s” and “Invincible,” Bernheimer’s book is a first-person shooter in storytelling terms, from the point of view of Cal Stringel, a low-rent supervillain in Tony Stark armor who’s forced to help save the world when most of the population, including the heroes, are overtaken by alien parasites launching a full-scale invasion. When we first meet him, he hasn’t been out of his armor in days, and his descriptions of how sweaty and putrid that can get are the perfect kind of “never-thought-of-that” moments that give the story it’s realistic edge.

Of course, I’ve stayed on the prowl for superhero fiction ever since getting my first book out into the world, and in the process stumbled across the work of Casey Glanders and his Gailsone series. Glanders is one prolific motherfucker. I don’t know if he holds down a day job, but if so, I want to know his secret because I don’t think I have enough writing hours left in my life to pump out the amount of work he’s produced just in the last two years. 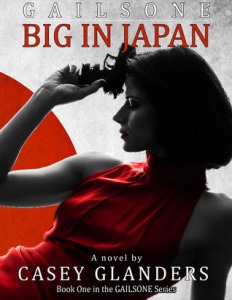 Glanders created his villain-turned-hero, Alice “Dyspell” Gailsone, because he’s got daughters, and he looked around and felt there weren’t enough female heroes on the market. So his books are all led, and well-populated, by strong females (all with their share of baggage, as any good villain-turned-hero should have). After a lifetime on the dark side, Alice is taking a second shot at life seeing how the hero half lives, and while she’s not afraid to get dirty, she’s frequently better at it than the heroes who’ve recruited her.

Last but not least, there’s Rafael Chandler’s The Astounding Antagonists. 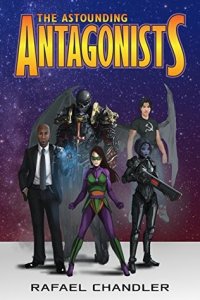 Don’t let the cover art fool you: this Anti-Avengers type tale makes for one solid book. It’s a wildly entertaining story about what happens when the “good guys” become nothing more than abusive authority figures who are as morally compromised as the so-called villains, and frequently worse. If anything, Chandler might weight things a little too heavily on the side of the heroes being just outright awful, while imbuing his Antagonists with far more complexity, weight and moral authority. But if you enjoy rooting for the outsider, if you’re the type to always bet on the underdog, or if you just want to identify with the bad guy’s POV sometimes, you couldn’t go wrong with any of these.

Just another WordPress.com site dedicated to dastardly deeds and detritus

Floating thoughts, A place where my beautifully weird thoughts floating around in my mind are posted.

"Find what you love and let it kill you." – Charles Bukowski

The Worst Example Of Humanity, Inanity, And Manatee

Musings and books from a grunty overthinker

Culture, Under the Lens

A blog full of humorous and poignant observations.

Life should be full of joy, wonder, and lots of comic book super heroes!

A collection of superhero fiction authors

My Blog
The Nerd Nebula

The Nucleus of the Universe for all Nerd Hacks!

numbnutsbobo
The Children's Guide to Death

The pages contained here are pieces about death, written by the Mount Purgatory Creative Writing Class. Those seeking advice or counselling, children in particular, should look elsewhere.

The Dystopian Nation of City-State

Tales from the creative life.

Fiction Writer, Product Reviews, Politics, and Movies: Something for One and All!

Capepunk for the discerning nerdbot