The Executive Producer of the Treasury. Because if you’re going to pick a man to handle all the money, you want the guy who helped make sure we got that Entourage movie. I don’t know enough about him to know why I hate him but he might be the only guy in the entire cabinet who actually likes the thing he’s been put in charge of. I mean, Education Secretary Betsy DeVos loathes the entire sum of human knowledge, and I’m pretty sure HUDsucker Ben Carson would love to distance himself from anything remotely “urban,” but Munchkin loves the ever-living shit out of that money. You don’t bankroll Suicide Squad because you give a shit about telling stories; you do it for the fat stacks! In fact, by Trumpian logic, and the Munchman’s track record, it would’ve made more sense to put him in charge of, like, the Public Broadcasting System and let him turn it into a pay-per-view channel where post-Americans can both view and participate in an endless real life livestream of Mad Max: Fury Road (which he also helped pay for so, oh, shit, does that mean I kinda have to like him? Fuck me).

He Who Walks Behind the Rows. This is what 30 looks like when you were born already dead inside. Seriously, this guy has been alive just a few months less than I’ve been out of high school, and while I’m still trying to figure out what to do with my life, he’s already positioned himself to be instrumental in the ending of ALL LIFE. Do I resent him because he’s an overachiever, or do I fear him because he is able to stare into my soul without even bothering to focus his eyes? While most of the Trumplets appear to have been handpicked for their former status as schoolyard bullies, Miller appears to have been selected precisely because of his lot in life as one of the eternally tormented. He’s such a mealworm I wish I’d reenrolled in grade school in the ’90s just so I could’ve got a few licks in. He is to white genetic superiority what Keystone Light is to actual beer. While he would’ve happily aided Hitler in bringing about the glory of the Thousand Year Reich, he would have had to voluntarily throw himself into a Krystalnacht bonfire once the real Aryans showed up on the scene. 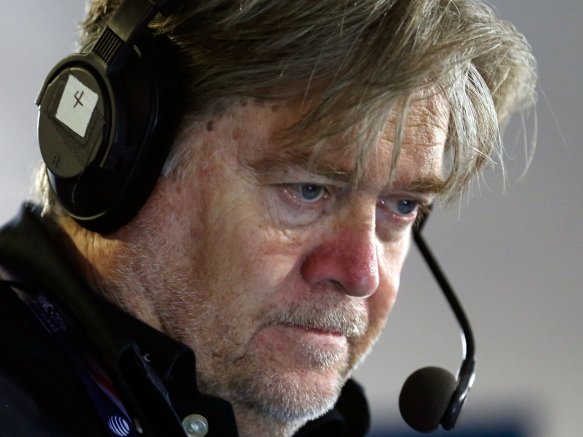 If Gastrointestinal Distress Had a Face. Entire medical careers will be built on simply observing the various dermatological horrors scriven on this visage in much the way the Necronomicon was etched in blood-ink on papyrus recycled from dead flesh. There’s a reason for this. When Bannon’s underboss Don Trump made good on his promise to drain the swamps along the Potomac, he did so by opening a yawning Hellmouth through which eldritch evils could spill into our realm and assume both cabinet positions and semi-human form. Remember Vincent D’Onofrio’s incredible, Oscar-worthy performance in the original Men in Black as a giant alien cockroach wearing a farmer’s desiccated epidermis as an ill-fitting meatsuit? I have it on good authority that, method actor that he is, D’Onofrio actually had himself briefly time displaced from 1997 to the nightmarish apocalyptic future of RIGHT NOW in order to observe and study Bannon for the role. For all his Herculean efforts, D’Onofrio could never quite nail the squirming discomfort that Bannon displays in his attempts to walk through the world in an approximation of a real-time third dimensional homo sapiens. 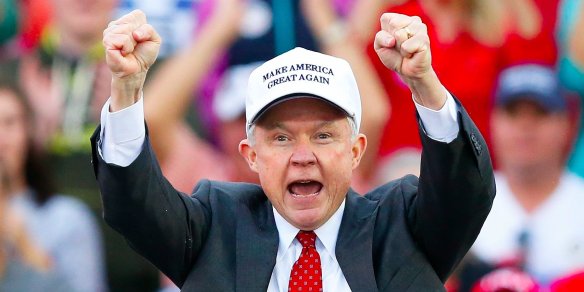 The Twinkly Gimlet-Eyed Elfin Racist Shitsack. A mint julep-sipping, plantation portico-sitting, Coen Brothers cartoon of a Southern politico, from his ridiculous name to his preposterous voice to his unctuous demeanor, a leftover scrap of something from what should be the distant ugly past, like a skintag removed from the corpse of Strom Thurmond and somehow allowed to reach maturity. This makes my atheist ass believe that maybe there is a god and she is some kind of bawdy satirical writer dreaming up increasingly ludicrous public caricatures to trot out in front of us as if they were actual people, archetypes that we can gawk at in terrified wonder as they endeavor to undo decades of hard-won progress right in front of our eyes…

Just another WordPress.com site dedicated to dastardly deeds and detritus

Floating thoughts, A place where my beautifully weird thoughts floating around in my mind are posted.

"Find what you love and let it kill you." – Charles Bukowski

The Worst Example Of Humanity, Inanity, And Manatee

Musings and books from a grunty overthinker

Culture, Under the Lens

A blog full of humorous and poignant observations.

Life should be full of joy, wonder, and lots of comic book super heroes!

A collection of superhero fiction authors

The Nucleus of the Universe for all Nerd Hacks!

numbnutsbobo
The Children's Guide to Death

The pages contained here are pieces about death, written by the Mount Purgatory Creative Writing Class. Those seeking advice or counselling, children in particular, should look elsewhere.

The Dystopian Nation of City-State

Tales from the creative life.

Fiction Writer, Product Reviews, Politics, and Movies: Something for One and All!

Capepunk for the discerning nerdbot